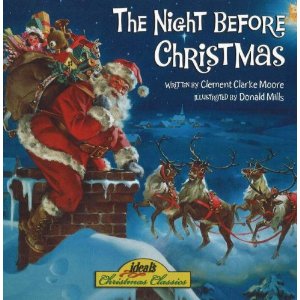 The Santa Claus we know today has a white beard, wears a red suit and matching hat, flies around in a sleigh pulled by flying reindeer, and runs a toy factory run by elves at the North Pole. He is a fantasy loved by children all around the world. But how did this tradition of a gift-giving Santa Claus begin?

A real man by the name of Saint Nicholas was the inspiration for today’s Santa Claus. St. Nicholas was born around 280 AD in the area of the world that is now Turkey. His parents were wealthy Christians who died when Nicholas was still a small child. Wanting to follow Jesus’ advice to give to the poor, Nicholas gave away his inheritance and devoted his life to helping those less fortunate. He devoted his life to the church and became the Bishop of Myra when he was a young man.

Throughout his life, he always made an effort to help others, particularly children, and he was well known for his kindness. One legend about the Saint tells how he threw three bags of gold coins down the chimney of a poor man with three daughters. In some versions of this story, the coins fell into stockings the girls had placed by the fire. This story led to the modern tradition of hanging stockings by the fireplace and leaving oranges (symbolizing the bags of gold) in the toe of Christmas stockings.

Saint Nicholas died on December 6, 343 AD, but his legend continued to spread. The Dutch, who knew him as Sinter Klass (a nickname for Sint Nikolaas), brought that legend to America. Sinter Klaas soon became the patron saint of New York City and part of the local culture.

Then Clement Clark Moore’s poem, “A Visit from Saint Nicholas” (or “The Night Before Christmas”) created the now-popular image of “a jolly old elf” with a “little round belly, that shook when he laughed, like a bowlful of jelly.” Political cartoonist Thomas Nast helped popularize this image. In 1863 he began drawing a series of cartoons for Harper’s Weekly magazine that were based on the character in the poem and Washington Irving’s book. The Santa Claus depicted by the cartoonist had a beard, a pipe and fur clothing, and these images became the basis for our modern Santa. The cartoonist was also the one who invented Mrs. Claus, Santa’s elves and the North Pole.