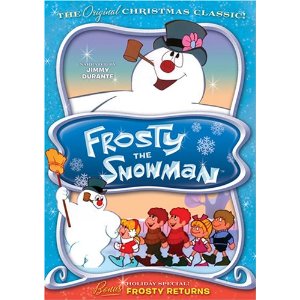 “Frosty the Snowman” the animated TV special was based on the song by the same name written by Walter “Jack” Rollins and Steve Nelson, and first recorded by Gene Autry and the Cass County Boys in 1950. The song came one year after Autry’s success with “Rudolph the Red-Nosed Reindeer,” but the TV special wasn’t created until 19 years later. Here are some more fun facts about the animated special starring everyone’s favorite snowman.

– Frosty was first brought to life in film in a three-minute 1954 UPA studio short that was filmed entirely in black and white.

– Voice actress June Foray was the voice of the teacher. She was also the actress who did the voice of Little Cindy Lou Who in “How the Grinch Stole Christmas.”

– When Frosty is shown carrying Karen into the greenhouse, he says, “Besides, I’ve been needing to take off a little weight, anyway.” But his mouth doesn’t move when he talks.

– Jimmy Durante was the voice of the narrator. “Frosty the Snowman” was Durante’s last film. He did one short film appearance and documentaries after this, but never another movie.

– In the scene where Frosty comes to life and is trying to count to 10, he has five fingers on one hand and four on the other. After he is done counting, he has four fingers on both hands.